You are here: Home / News / August ends up as one of the driest months in the record book 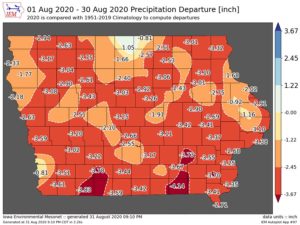 August of 2020 will be remembered for one of Iowa’s worst-ever weather disasters, but the just-ended month is also going down as one of the state’s tenth driest Augusts on record.

State climatologist Justin Glisan says Iowa’s weather records go back 148 years and the past month was exceptionally dry.
“We’re looking at anywhere from about a two-to-three inch precipitation deficit across the state with the driest part of the state being in that southeast corner,” Glisan says, “with precipitation departures of up to four inches.”

While the month started off with cooler-than-normal temperatures, it ended with a stretch of very hot days with highs in the mid- to upper-90s.  “But if we look overall across the entire month, we were about one-degree above average across the state with that northwest corner seeing anywhere from two-to-three degrees above normal,” Glisan says. “That was the warmest part of the state. If you look at the rest of the state, near-normal temperatures.”

August 10th, in Glisan’s words, was “one of the most significant weather dates in Iowa history.” The derecho started building in South Dakota and Nebraska but hit Iowa with hurricane-force intensity as winds peaked in Cedar Rapids at 140 miles-an-hour.
“From Carroll to the Quad Cities and Clinton, anywhere from three-and-a-half million acres of corn damaged and two-and-a-half million acres of beans damaged, let alone the tree and structural damage within the urban areas,” Glisan says. “That swath of the derecho was 770 miles long.”