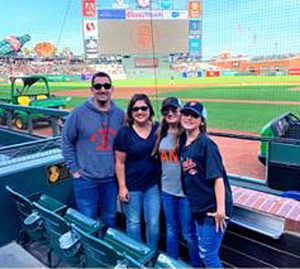 Bonita Van Otterloo and her family.

A northwest Iowa family has won an unusual contest thrown by a major league baseball player and it has benefited their local food pantry in Sioux Center.

Bonita Van Otterloo and her family are big fans of the San Francisco Giants. As she was thumbing through Twitter on August 1, she saw Giants third baseman Evan Longoria was holding a contest to give away two Harry Potter Lego sets he assembled during baseball’s quarantine. Contest participants were to message him two photos. The first was to have some sort of Giants theme.

“I had a picture of our family next to the field, next the Giants dugout at last year’s game that I submitted,” Van Otterloo said.

The other photo was to have some sort of Harry Potter theme. Van Otterloo snapped a photo of her two daughters and their Harry Potter gear.

“We were actually watching the Giants-Rangers game at that point and Evan was up to bat, so I told the girls, I said: ‘How ’bout you you stand on each side of the TV? And we’ll just have Evan be batting in the middle of this picture,’ so I sent both pictures,” she said. “…I said: ‘You might recognize the guy batting in the background. And P.S. you singled this at bat.'”

The next day, Van Otterloo got a message from Longoria saying she was going to win and that he loved the photos. The next two hours were spent messaging each other logistical details. Van Otterloo, as the winner, got to choose to donate to a charity and Longoria promised to make a donation, too. Van Otterloo donated to the Hope Food Pantry in Sioux Center right away and messaged a photo of the donation receipt to the major leaguer.

“It was kind of like one of those things, like, I cannot believe this is happening. We’re talking to one of our favorite players,” Van Otterloo said. “…He had made his donation to the Hope Food Pantry as well. He blanked out the total and stuff, which I don’t need to know. That’s between him and the Hope Food Pantry and stuff. He just wanted to let me know: ‘Yep, I made a donation, too.'”

Van Otterloo started following the Giants player on Instagram the next day.

“He had posted the picture of our girls on his Instagram and said we had won,'” Van Otterloo said. “…On his Instagram story he had also posted (a video, saying): ‘Hey, everyone. If you can, go and support and donate to the Hope Food Pantry in Sioux Center, Iowa.’ And I’m like, ‘Oh my goodness.’ That’s so gracious and kind of him.”