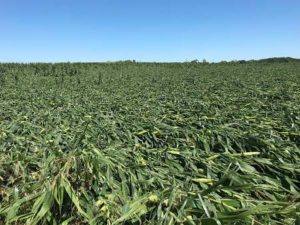 With millions of acres of Iowa cropland flattened by last month’s derecho, a webinar is planned for tomorrow targeting Iowa farmers who need to address the challenges of managing those destroyed crops.

While officials initially estimated 14-million acres were impacted, field agronomist Meaghan Anderson, at the Iowa State University Extension, says at least three-and-a-half million acres of corn are shot. “There are a lot of acres that we would consider to be not salvageable at this point,” Anderson says, “and a number of them have already been tilled under or the residue has been managed in one way or another because they’ve been deemed to be not mechanically harvestable.”

The August 10th storm, with peak straight-line winds of 140 miles-an-hour, hit at a point when most of Iowa’s corn crop was at maximum height and all of the roots were fully developed. Anderson says there’s no hope for the corn that was knocked down being able to right itself — and the majority of the ears are worthless.

“The corn is very light so it’s very poor quality,” Anderson says. “It’s going to be very hard to dry down and that’s even if we could pick it up off the ground. Some of it is just so flat that there’s not a way that we could physically get it into a combine.” The derecho left a significant amount of acreage where the corn can’t be harvested, which creates a challenge in fields across the state.

“Most people are going to need to attempt to do some kind of residue management with it, at the very least to size the corn stalks,” Anderson says. “Instead of being six-plus-foot long corn stalks, we really need them to be smaller pieces of corn stalk, especially when we think about planting next spring.” Some farmers might be able to allow livestock to graze on the fallen corn, but there are practical difficulties with that option, too.

She says some growers are struggling as they look to the 2021 growing season. “Nobody wants to talk about all the corn that’s on the ground,” Anderson says, “but talking about how we can best manage these fields looking toward next year and what we need to be thinking about for next year, those are all important discussion points that we’ll have on Wednesday.”

The webinar will run from 1 to 2 p.m. It’s free but registration is required at www.aep.iastate.edu/corn