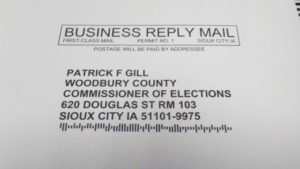 Woodbury County’s Board of Supervisors has voted not to appeal a judge’s ruling that nullified absentee ballot request forms mailed to county voters by County Auditor Pat Gill.

The forms Gill sent included voter I-D numbers. A lawsuit filed by the Republican Party and President Trump’s campaign argued that violated a state order that all forms mailed by county auditors had to be blank and a judge agreed. Woodbury County Supervisor Justin Wright said Gill should have discussed the mailing with the supervisors before the forms were sent.

“I understand that’s the purview of Auditor Gill,” he said, “but on such a heated issue, we have now invited additional costs to the taxpayer here in Woodbury County.”

“With nine elected official in this county, the board of supervisors doesn’t really have control over the other four, nor do I want control of them, by the way,” Pottebaum said. “For them to have to come to us before they do something — I don’t want the sheriff saying, ‘Well, want to have a meeting before I send a SWAT team somewhere because I might get sued.’ I don’t want that. I want them to do their jobs as they’re elected to do.”

Gill, the county auditor, did not speak during the supervisor’s meeting.