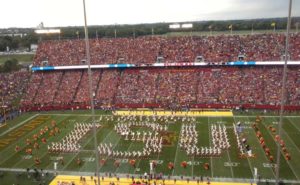 Ninety minutes after Governor Kim Reynolds offered a strong defense of having fans in the stands for the Cyclone football game in Ames on September 12, the university announced no fans will be allowed.

In a written statement, Iowa State’s athletics director said he was notified last night by ISU’s president that she had “evaluated feedback from the community” and reversed the decision to let 25,000 fans in the stadium that seats 61,500.

Reynolds, who spoke with reporters late this morning, said Iowa high schools are having fans at Friday night football games and it’s about getting “lives back to normal.”

Iowa has been the national covid hot spot this past week and Ames was ranked as having the most coronavirus cases per capita in the country. Iowa City wasn’t far behind, as students returned to campus for the fall semester.

“We did see a rapid increase over a week as they moved back in and we started going the testing and, as I said, if we don’t see that number come back down, then we’re going to have to take a look at what else we need to do,” Reynolds said.

Public health officials in Story County urged university officials to have the games in Ames without fans in the stadium. The Ames City Council passed an ordinance last night requiring face coverings in public places, although no penalties are attached to the policy which takes effect Friday.

According to the governor, the state’s surging Covid case counts are primarily among young adults in six counties and that’s why she chose to close bars in the urban areas of Polk, Dallas and Linn Counties along with bars in Story, Johnson and Black Hawk Counties where the three state universities are located. The governor suggests the closures shouldn’t have been a surprise to bar owners.

“It didn’t just happen overnight. We’ve tried to work with them. We’ve done webinars. We’ve tried to tell them and work with them on what the expectations are. We need them to follow through,” Reynolds said, “but at this point, because of the increase in the numbers that we were seeing and the communities we were seeing them in and kind of some potential impact to workforce, I made the decision that we needed to go ahead and close down bars in those six counties.”

Reynolds is being sued by a central Iowa bar owner over her decision. The White House Coronavirus Task Force has recommended that Reynolds close bars in 61 of Iowa’s 99 counties — and issue a statewide mask mandate. Reynolds defended her approach as “targeted” at areas of the state where cases are surging.

“We know where it’s at. We know where they’re going,” Reynolds said. “…We’re going to monitor this next week and we’re going to see if the mitigation efforts that we’ve applied starts to reduce those numbers and if they don’t, we’ll take additional steps.”

(This post was updated at 1:45 p.m. with new information after ISU’s decision was announced.)