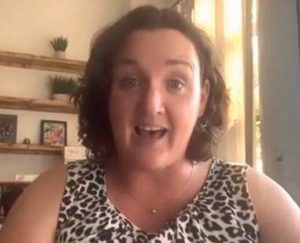 California Congresswoman Katie Porter tonight said one of the lessons she learned growing up in southwest Iowa during the Farm Crisis was that Washington politicians weren’t there for Iowans when it really mattered.

“Iowa’s not just a place you visit every four years,” Porter said. “It is a home. It is a place where people are raising families and building an economy, taking care of loved ones.”

Porter was tonight’s keynote speaker for Progress Iowa’s 6th Annual, but first-ever virtual Corn Feed fundraiser. Porter, who was born in Fort Dodge and grew up in Lorimor, talked about the day in 1983 when the bank in Afton failed and was closed. Porter shifted to the 2020 campaign as she concluded, telling Iowa Democrats there’s work to be done at both the national and local level.

“I know that campaigning this year looks a little different,” Porter said. “…It’s more phone calls and less large rallies, but those conversations count just as much.”

Porter is a former consumer protection lawyer and law professor who won a first term in the U.S. House in 2018. She’s garnered the attention of Democratic Party activists for the way she questions witnesses at congressional hearings, including her quizzing of the U.S. Postmaster General last month.

Porter now joins a list of past Democratic presidential candidates like former Maryland Governor Martin O’Malley and 2020 Iowa Caucus winner Pete Buttigieg as having been a keynote speaker at the Progress Iowa Corn Feed.