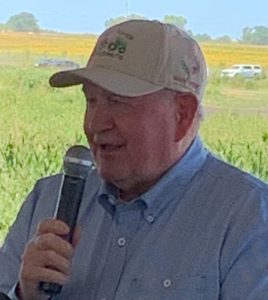 U. S. Agriculture Secretary Sonny Perdue is visiting Iowa today and has taken an official step to make emergency federal loans available to farm operations that were significantly damaged by last month’s derecho.

“I’m here to announce that Iowa has qualified for a secretarial disaster which will unlock the USDA programs for Iowa farmers, so I’m going to sign that right here now,” Perdue said at a gathering on a farm near Radcliffe where engineered wetlands have been installed.

Earlier in the day, Perdue took an aerial tour of damaged fields in Hardin County.

“As a farm boy myself I remember coming to Iowa and seeing those flowing cornfields standing so tall and proud, ready to be harvested,” Perdue said, “and frankly flying over that and seeing the flattened corn, I was honestly kind of sad.”

The secretary’s declaration names 18 of the hardest hit counties as primary natural disaster areas. He told reporters more counties may qualify once financial assessments are completed. Crop losses must reach a 30 percent threshold. Most farmers already have crop insurance to cover losses.

“Although we don’t have regulatory authority over the insurance companies,” Perdue told reporters. “I’m troubled by some of the inconsistencies that we see in crop insurance determinations.” 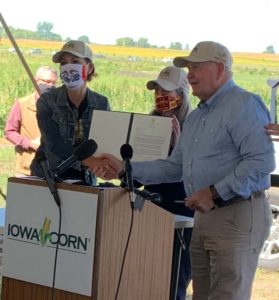 Dennis Friest lives southeast of Radcliffe and estimates the derecho hit his farm with 80 to 90 mile-an-hour winds.

“Just east of me it destroyed two 80,000 bushel bins,” he told Radio Iowa. “Four miles east of me it took down three or four barns.”

He’s dealing with some damaged fields — and uncertainty about his crop insurance.

“There’s a funny smell out there. Some of the corn is brown and dying. Some of the varieties are staying green,” Friest said. “We’re going to harvest some next week. We’ll find out what’s going on…If it’s too bad, we might just destroy it. We’ll have to see. Hopefully if I get the snouts under it, I can run it through the combine and not get much dirt through it. We’re willing to give it a try…Even if we destroy one field, we may not be able to collect insurance because the others are pretty good, so there are a lot of decisions we have to make as farmers. It’s an unusual year.”

The U.S. Ag Secretary’s primary disaster declaration covers 18 counties as well as the 24 counties that are adjacent to those 18, since storms do not follow county boundaries. Farmers in those 42 counties may apply for Farm Service Agency emergency loans. The loans can cover property losses or be used to refinance debt.