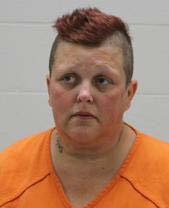 Pottawattamie County Attorney Matt Wilber says this was going to be very first jury trial since the COVID pandemic shutdown.
“We had to rent a ballroom at the Mid-America Center to do jury selection. The plan was to bring in 150 prospective jurors and try to get a jury picked in this case. That was really where we were in that process of trying to just figure out the logistics,” Wilbur says.

Wilber says he had been in communication with Montello-Roberts’ attorney and they were eventually able to settle on a deal.
“We had offered her a deal months ago: 50 years with a minimum of 35 — they came back and said how about half that, 25 with a minimum of 17-and-a-half and we said no,” according to Wilber. “The judge brought up to us that we were about to bring 150 people in, probably at least one-third of whom are elderly, into this case. He asked if there was any room where we could get this settled where we don’t have to put those civilians at risk. We really started sitting down and talking in earnest.”

Montello-Roberts is accused of going on a crime spree last August with 28-year-old Troy Petersen of Essex and they were accused of killing two men in a series of robberies over several days. Their crime spree ended in a standoff with police where Petersen was shot to death.

Wilber says Montello-Roberts will not be eligible for parole until she turns 74. “In that case where they’re really not disputing whether she was guilty or not, you’re sort of fighting over what amount of time should she serve,” Wilber explains. “We looked at a case where we figured that at 79, the chances that she got out of prison alive were probably not great. At 74, they’re probably still not great, honestly. But, she at least has some hope and I think that’s what — for her — inclined her to accept what we offered.”

Wilber says the families of the two men killed said they would accept the plea deal. “It’s a tough call always,” Wilber says. “I have to take into account what the particular defendant did, what the victims’ families want, criminal records that we’re looking at, what are we doing to the criminal justice system by taking a case to trial. We’ve got all of those factors that we have to look at.”

Online court records show the new charges include two counts of assault while participating in a felony, plus the original robbery, burglary, and attempted murder of a peace office charges. Police say Petersen was the person who fired the shots that killed the individuals, but that Montello-Roberts was a participant in the event. Montello-Roberts was scheduled to go to trial on September 14th — but will now be sentenced on September 8th.