You are here: Home / News / Loss of football fans could lead to sports cuts for Iowa State University 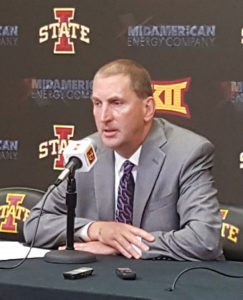 The decision to go without fans at Iowa State football games is going to lead to some tough budget decisions for the athletic department.

Cyclone Athletic Director Jamie Pollard sent a letter to fans today saying he is adjusting the projected budget deficit from $17.5 million dollars to $30 million. Pollard says the original estimate was based on having fans for football.

Pollard says the department will have to look at several options to make up the deficit, including more salary cuts and layoffs in the department; possibly eliminating sports;  and the closing of C.Y. Stephens Auditorium.

Pollard says the athletic department subsidizes C.Y. Stephens by one million dollars annually and the revenues generated by events there are not enough to cover its operating expenses, or pay for the facility’s deferred maintenance.