You are here: Home / Outdoors / Pheasant numbers could lead to most birds taken in 15 years 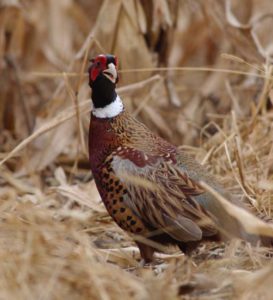 Iowa pheasant hunters could see one of the best seasons in years when they take to the fields in October.

DNR Wildlife Biologist, Todd Bogenschutz says the roadside counts in August are very promising. “Six of the nine survey regions are averaging over 20 birds — somewhere between 20 and almost 30 birds a route– we haven’t had that many regions be over 20 since ’07,” Bogenschutz says.

He says the weather is a big factor as the mild winter meant the hen survival was a little bit above normal and the cool spring didn’t seem to impact the nesting season, and rainfall in April and May was a little below normal. The late harvest last year saw the pheasant season open with many acres of corn unharvested and plenty of places for the birds to hide. Bogenschutz says that situation should be reversed this year.

“It’s looking like Iowa is not going to not have hardly any crops (standing) by pheasant opener — so couple that with pretty good survey numbers and it could be our best opener in years,” according to Bogenschutz. Hunters took some 300,000 birds two years ago before a drop off last year. Bogenschutz expects the numbers to rebound back and possibly above two years ago.

Bogenschutz says license sales for other outdoor activities from turkey hunting to fishing have been up — and that could carry into the pheasant season — and that would push the bird numbers up.  “The average pheasant hunter last year — this is residents and non-residents combined — only hunted six days. And they shot six birds for the season — so about a bird per day is the average,” Bogenschutz says. “I expect those numbers will improve. Might be a few more days and the harvest for hunters might be up too.”