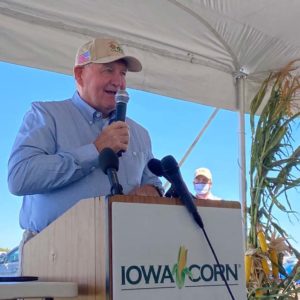 A new U.S.D.A. estimate indicates federal payments will account for 36% of farm income this year, as the agency spends at least $37 billion dollars extra to make up for losses in the ag economy.

During a news conference on a farm near Radcliffe, Iowa, yesterday, U.S. Ag Secretary Sonny Perdue was asked if that level of government spending is sustainable.

“No farmer in the country wants to work for a government check,” Perdue said.

“They’d much rather have crops or a check coming from the scales at the elevator than coming through the mailbox,” Perdue said of American farmers, “but I can tell you one thing, that President Trump is committed to not to let China, through retaliation, interfere with that. He’s not going to allow Covid to interfere with that and that’s where these funds are coming from.”

In January, President Trump announced he’d reached “phase one” of a trade deal with China. It cut some U.S. tariffs on Chinese imports, with the expectation that the Chinese would buy $80 billion in agricultural products by the end of 2021. Perdue pointed to the announcement earlier this week that China had signed agreements to buy 1.7 million metric tons of U.S. corn and 120,000 tons of U.S. soybeans.

“They got off to a slow start, but it looks like to me that China’s trying to do what it can to fulfill those ag import obligations under phase one,” Perdue said. “…They’ve got to keep their foot on the pedal all the way. We’ve got to have week-by-week good numbers, but they’ve been there the last few weeks.”

Perdue visited an engineered wetland, a fish farm, and two other agribusinesses during his trip to Iowa. During remarks at a Hardin County farm, Perdue publicly signed a document so farmers in 42 Iowa counties who had crop or property damage from last month’s derecho may apply for emergency federal loans through the Farm Service Agency.