You are here: Home / News / Historic Sioux City hotel back open after remodeling 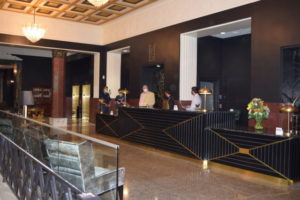 The lobby of the Warrior Hotel in Sioux City.

Sioux City’s Warrior Hotel is open again for the first time in 40 years.

The historic downtown building at 6th and Nebraska Streets hosted private events with guests staying at the newly refurbished hotel. Developers Amrit Gill and his wife Amy had a specific goal in mind when they took on the challenge of remodeling the structure and the adjacent Davidson Building.

“To give Sioux City a premiere downtown historic hotel that will be the heartbeat of the community,” Gill says. Amy Gill says the hotel’s look combines the old with the new. “It’s an amazing classic design — and quirky. In the column capitals, there’s buffalo skulls — I don’t think anybody notice that,” Gills says. “And if you look there’s buffaloes and corn there’s the state flower — which is the Wild Rose — and to play off of that and to say this is all about Sioux City.”

When fully completed, the Warrior Hotel, including the Davidson Building, will feature 148 guest rooms including 11 suites. The Davidson will also house 56 of the 148 hotel rooms on the second through fourth floors. Warrior Marketing Director Lila

Plambeck says bowling is also back in the downtown with the hotels “War Eagle Lanes.” She says it will be open to guests and the public with six total lanes. There’s also a lounge with games like darts, pool, and a Golden Tee for golfing aficionados. A spa, pool, and sauna will open later in the fall.

The Warrior will have a soft “reservations only” opening this Saturday, September 12th for both guest rooms and Woodbury’s American Steakhouse. The steakhouse will serve dinner only until further notice.