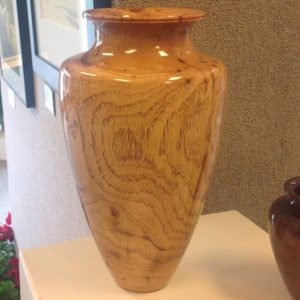 Seventy-eight-year-old Steve Sinner of Bettendorf says he chooses his raw materials very carefully and managed to find some prime pieces of maple in the McClellan Heights area of Davenport.  “I didn’t intentionally go driving around and looking for it. I just happened to see these as I went by them,” Sinner says. “These days, I have more access to wood as a general rule than I have time to work on it.”

As a woodturner, Sinner fastens a log to a lathe that rotates around a central axis, allowing him to use a series of chisels and other tools to carve away portions of the raw wood to create symmetrical forms. He’s so well-known for woodturning, friends or acquaintances will call him and offer trees they had to take down. Of the calls he gets, Sinner says he goes to look at about 10 percent of trees and just 10 percent of those are usable. 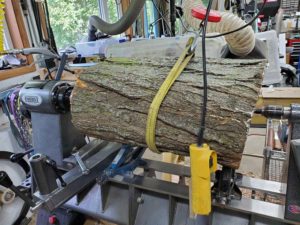 “If you had a very large hard maple tree, when you cut it up, if you didn’t chip it, it would fill two or three dump trucks,” he says. “Out of that entire tree, the wood that I would want would easily fit into my SUV.” Of all his years of woodturning, Sinner says he’s only purchased a tree once.

The four species he’s most interested in are walnut, sugar maple, hickory, and cherry. He says he didn’t get many calls after the storm which blasted across Iowa on August 10th, packing winds up to 140 miles-an-hour.

“The storm was kind of a traumatic experience for a lot of folks and it wasn’t a matter of, ‘Oh, I’m looking for an opportunity to make something good out of this,’ plus like most of us, they were left without power or Internet, no way to charge our phones and so on,” he says. “It wasn’t the normal sort of a situation where you lose a tree.” 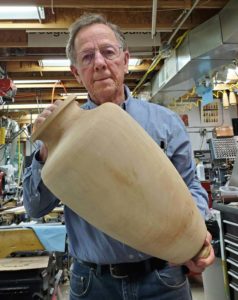 Sinner and his creation before the finish.

Over the years, Sinner has produced many detailed pieces that are auctioned in fundraisers for the Figge Art Museum in Davenport, often netting thousands of dollars each. In addition to his art, which takes months for each piece, Sinner operates Advanced Lathe Tools, which makes and sells tools he developed over the years to create his deep hollow vessels.