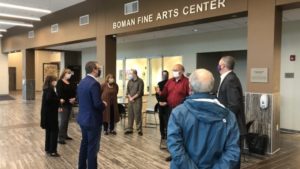 Dan May, the facility manager for the Boman Fine Arts Center, says it’s also being used as space for meetings. “This building, while being shuttered for performances and for the community, is very busy right now,” May says.

The theater has seating for 630. It’s now limited to about 100 people.

“We have transitioned into more of an academic space and more of a meeting space,” May says, “because it’s one of the few places in the area that has enough space that people can spread out and be socially distanced.”

There was a tense moment during the lieutenant governor’s visit as a passerby – who introduced herself as a teacher – first thanked Gregg for wearing a face mask, but criticized the Reynolds Administration for how it has handled the start of school for Iowa high school and college students, then the woman walked away. Later, a reporter asked Gregg about the state’s response to the coronavirus.

“I’m very proud of the way that Governor Reynolds has led our state during this unprecedented global pandemic,” Gregg replied. “These are issues that none of us could have anticipated as we headed into 2020 and I think she’s led us very admirably and had to make some really difficult decisions in light of the situation we face and I think she’s struck an appropriate balance as she balances things like public health concerns and economic concerns and education concerns.”

The Boman Fine Arts Center Gregg in Forest City was partly financed with a state grant. Construction on the center began in the spring of 2017 and its official grand opening was in the fall of 2018.

“The thing that really makes this project stand out is the amazing amount of partners,” Gregg said. “It took a strong community and strong community organizations coming together. You have Waldorf University as a big part of it and, of course, very generous benefactors who helped make a project like this a reality.”

The state grant of nearly $625,000 accounted for about six percent of the nearly $10 million cost of the project.