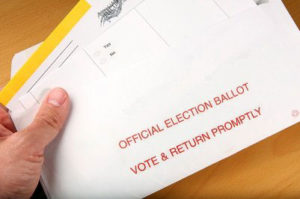 The judge who nullified about 50,000 absentee ballot requests in Linn County will rule on a similar case in Johnson County.

Republicans and the Trump campaign sued over absentee ballot request forms sent to voters in three of Iowa’s 99 counties that included the voter’s birth date and voter ID number. During a hearing today, Judge Ian Thornhill said the chief judge in the district that includes both Linn and Johnson Counties assigned him to the Johnson County case because he’s familiar with the underlying issues.

“There’s nothing magical or bizarre that I showed up down here because it’s otherwise part of the duties,” Thornhill said.

KGAN TV broadcast the nearly two-hour hearing on YouTube. Thornhill told lawyers in the courtroom not to expect him to issue a ruling this evening.

“This is not the only case that’s going on in this district right now that’s complicated and involved, so we are going to get this out as fast as we can,” Thornbill said.

The lawsuits revolve around the Iowa Secretary of State’s order that county auditors mail blank absentee ballot request forms to voters. In August, another judge invalidated the forms Woodbury County’s auditor mailed to voters in that county.

Iowans may get several forms in the mail this election season. The blank forms Iowa Secretary of State Paul Pate sent to every active voter started showing up in mailboxes on Saturday. Political parties and outside groups are also sending absentee ballot request forms to voters.