You are here: Home / News / Loss of milkweeds linked to drop in monarch butterfly population 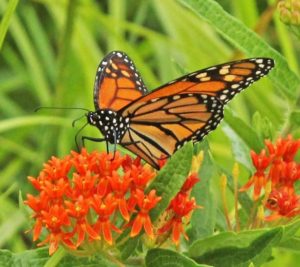 As summer starts to conclude, monarch butterflies are beginning to migrate through Iowa, headed for Mexico. Over the past 20 years, the population of monarchs has been in steep decline.

A new report concludes the loss of milkweed plants is the key reason for the butterflies dying off. It’s a theory Iowa State University researcher John Pleasants has supported for years.

“The milkweeds in agricultural fields were really preferred by monarchs,” Pleasants says. “Once those milkweeds were gone, it was clear there was going be some consequence to this and that’s the ‘smoking gun,’ if you will, for the decline of the monarch population.”

Pleasants estimates at least a billion stems of milkweed plants need to grow across the Midwest to restore the population of monarch butterflies. Pleasants says the decrease in their numbers coincides with widespread use of herbicides to reduce milkweeds.

“One of the things that these monarchs do is they’ll come to a patch of milkweed, they’ll lay a couple of eggs, and then move on to the next patch,” Pleasants says. “They’re constantly on the lookout for the next patch and when you strip the landscape of lots and lots and lots of patches, it’s harder for them to find the next patch.”

Monarch caterpillars can only survive on milkweed. In response to the study, the Iowa Monarch Conservation Consortium is leading an effort to plant 830,000 acres of monarch habitat by 2038.