You are here: Home / Education / Research leads Loras College in Dubuque to take down statue of founder 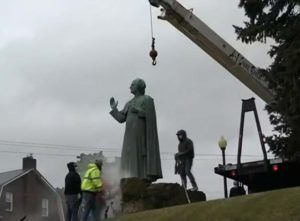 Members of the Loras College community in Dubuque received a surprising email Tuesday morning announcing the university announced would be taking down a statue honoring its founder Bishop Mathias Loras.

The email said a researcher who was looking into the Bishop’s personal records to advance his scholarship work confirmed that Loras had enslaved a woman in the 1800’s for 16 years. Student Emanuel Rivera told KCRG TV employees started working on the statue just minutes after he got the email.

“I was in class when our president sent out the email and I was walking home…and we saw people tearing down the statue. I was surprised because it all happened like this,” he says. Student Daniel Feldhake says the news came as a complete surprise.
“My roommates and I were all working on homework and all of a sudden this email came out and the shock of trying to get through the whole thing and trying to understand what the message was but also take time to comprehend what implications and what kind of impact that has,” Feldhake told KCRG TV. 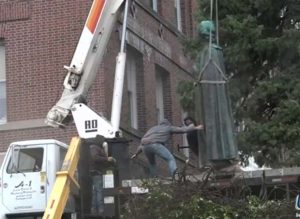 Even though everything happened quickly, they say they appreciate the decision. “It feels good just because it shows their openness to, not just Black students, but minorities. So as a student I want to make sure there is diversity, equity and inclusion that is promoted across the entire campus,” Rivera says. “This sheds a positive light and a positive message for both faculty and students.”

Loras president, James Collins, talked with KCRG TV about the decision to remove the statue. “The statue issue was one less of not recognizing Bishop Loras for his many contributions, but more instead to know that the placement of the statue on Loras’ campus is one of prominence and it’s also one of prominence of the city of Dubuque,” he says.

He says they want to send the proper message. “Based on who we are, particularly around issues of human dignity and Catholic identity, we didn’t think that, based on today and our future, that that should be the symbol of who we are.”

The statue will now go into storage until the community decides where to place it or even if it will be placed somewhere at all.

The decision sparked reaction on social media and many wondered whether or not the university would now change its name as well. Collins said that will not happen.