You are here: Home / Health / Medicine / Des Moines University breaks ground for a move to the west 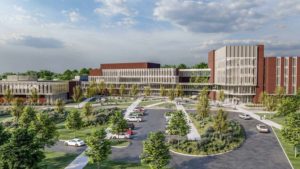 View of what the DMU new campus will look like.

Des Moines University broke ground today as it marked the start of construction that will see the medical school campus move to West Des Moines.

The new site in West Des Moines is 88 acres, and Franklin says it was exciting to be able to design the campus from scratch. And she says they will have the flexibility for the future. “There’s a lot with augmented virtual reality and a lot of simulation that goes on in medical education. Artificial intelligence, all these things, telehealth, all these things that are going on now — who know what it will be like 20 years from now — and how we are delivering care but are we preparing students.”

She says there are a couple of additions to their curriculum they’ve already gotten approval to add — including physical therapy. She says they have been wanting to add that program — but didn’t have space and they will be able to move forward. Franklin says they have a program in biomedical sciences that has also been approved.

Franklin says the move and new facility will have an impact on the entire state. “Des Moines University proudly acknowledges the fact that each one of the counties has graduates from DMU. They may not be a DO, they may be a PA or they may be a podiatrist — but we actually have met the healthcare needs of the state of Iowa by having our graduates serving all 99 counties,” Franklin says.

Franklin says it will take a couple of years to complete the new campus and move everything. “We are hoping to have it done by December 2022 and then have roughly six months to be able to relocate the entire campus. So the students joining us in the fall of 2023 will be joining us on the new campus,” Franklin says.

DMU has roughly 1,500 students and Franklin says they expect with new programs and the new campus that could expand to 2,000.