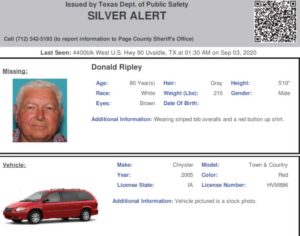 Ripley, who lives in rural Clarinda, left Uvalde, Texas, last Thursday and has yet to arrive at his home, or at the homes of any friends or family.

Page County Sheriff Lyle Palmer this case poses a challenge for his department. “Unfortunately, it’s not like a typical missing person case,” Palmer says, “where we can actually get out and do foot searches and cover some area. This last known location is quite a drive away, and it’s not feasible for us to try to go down there, and do another jurisdiction search.”

He says Ripley has been entered in nationwide databases as missing and his department is doing all it can to spread the word.
“We’re getting information out to every agency that we can think of, possibly doing a lot of other computer media work, and trying to get that done,” according to Palmer.

Ripley was last seen driving a red Chrysler Town and Country minivan, with license plate number HVM 886. The vehicle has no rack on top. Reportedly, the license plate was read in Denton County, Texas, approximately 28 hours after he left Uvalde. Texas issued a silver alert following the initial report of his disappearance.

Ripley is described as 5-10, approximately 215 pounds with brown eyes and white hair. He has a medical condition requiring daily medication. It’s believed the supply he took with him was close to running out, if not gone already.

Anyone with information on Ripley’s whereabouts should contact the Page County Sheriff’s Office at 712-542-5193.