You are here: Home / Sports / Cyclone fans can use app to have their cheers heard during football game

When Cyclone football players make big plays during Saturday’s season opener, they’ll hear fans cheering, even though Jack Trice Stadium will be nearly empty because of the pandemic.

A web-based platform is being used that will allow the voices of fans at home to be heard through the stadium’s PA system. Nathan Terry, associate marketing director at Iowa State University, says it’s an incredibly simple, clever app.

“You go to ‘IowaState.HearMeCheer.com‘ and you’ll be prompted to follow a couple of quick steps to allow the use of the microphone on your cell phone,” Terry says. “You just set your phone down and watch the game and cheer along, just like you would here at Jack Trice Stadium.”

The application will also work from a laptop or tablet, as long as there’s a microphone attached. The venue normally seats more than 61,000 people, so he hopes thousands of loyal Cyclones will log in and use the free app to fill the stadium with their cheers.
“On the app itself, you’ll be able to see in the lower left hand corner how many people are using it,” Terry says. “There’s a button that fans at home will be able to toggle on and off and they’ll actually be able to hear the rest of the fans, the same thing that we would hear in the stadium.” 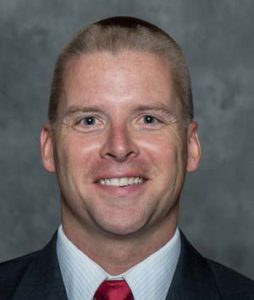 Imagine making a touchdown on your home field and not hearing any reaction from the empty stands. It would be a bit disheartening for the players, so Terry says this app will serve a dual purpose. “That was really the #1 goal, was to help our student-athletes feel like it’s a normal football game,” Terry says. “Secondly, was just to engage with our fans at home. They’re at home and they planned to be here. This is a way that, even from home they can cheer and create a great atmosphere here for our players.”

The Canadian company behind “Hear Me Cheer” is able to use algorithms so no single fan’s cheers — or comments — will be heard. The speakers at the stadium will broadcast only the combined shouts, gasps and even boos of everyone using the app.