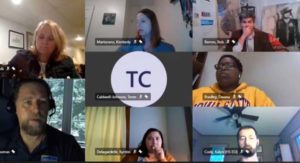 Students in Des Moines Public Schools will continue with virtual classes as the school board wrestles with its response to a judge’s ruling and the state’s refusal to waive a requirement that students spend at least half their time in a classroom.

Board member Kalyn Cody said Covid case counts in Polk County haven’t declined enough and he wants the district to continue classes online for at least nine weeks — until the first quarter ends.

“Our conditions are not favorable for opening our doors,” he said. “Everywhere else in the world has figured this out.”

Board member Kimberly Martorano said the board simply cannot hope the governor is “bluffing” about forcing students to make up time spent online rather in the classroom — and extending the school year would cost the district at least a million dollars per day.

“I think we have a state and governor that has extended an olive branch…We need to maximize that opportunity to our benefit,” Caldwell-Johnson said. “…So instead of putting up roadblocks, I’m willing to build bridges and I’m willing to move mountains to bring our kids back.”

Other board members said the state’s largest school district may not have enough teachers if students return to classrooms, since some teachers may decline to be inside school buildings for health reasons.

Superintendent Thomas Ahart said in addition to finding teachers, transporting kids to schools is a challenge in the district.  “What we’re finding is we have bus drivers who are literally afraid for the health and their life,” Ahart said, “and we’re losing bus drivers faster than we can hire and train new drivers.”