You are here: Home / News / ISU band adapts to be able to play for Saturday’s football game 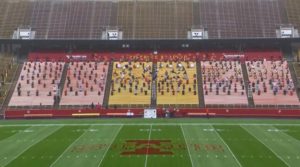 No fans will be allowed in the stands for Saturday’s Iowa State University football season opener, but the 400-member Cyclone Marching Band will be there in force.

Band members will take up most of the east side of Jack Trice Stadium, spaced more than seven feet apart. Band director Chris Carichner says each student will be wearing a special face covering, depending on the instrument they play.

“We have three different styles of masks,” Carichner says. “It’s very different than a standard mask. All of it looks the same with a slit this way and it overlaps a little bit so students can tuck their mouthpiece in and around and they can play. As their mouthpiece comes out, the mask seals back over them to make sure everybody is kept safe and so we can still play our instruments.” 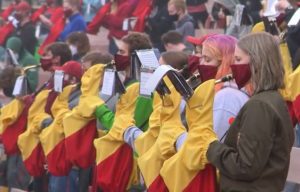 The band is outfitted with special instrument bags to try and prevent COVID-19 spread.

An appeal was put out to the ISU Alumni Band to help pay for the special equipment that’s needed to keep everyone safe during this pandemic era. Within 48 hours, the alumni band raised more than $20,000. Carichner says he’s been bowled over by the support, enthusiasm and ingenuity.

“We have some bags, basically, that we designed through the help of some band moms,” Carichner says. “We have an opening for the mouthpiece and then hand holes that are elastic to seal the hands around, so the students can still manipulate the woodwind instruments and no aerosols are released.”

Unlike years past, the band will not take the field during the game. They’ll do the pregame and halftime performances from the bleachers.

“The very first time we got together and played, they all had their masks on and their safety gear, and I just thought, ‘I don’t know how they’re going to do this,’ but our kids are amazing at Iowa State,” Carichner says. “The tears that flowed from my face, just to see them having fun and dancing and making music again together. It was therapeutic for all of us and it’s going to be awesome on Saturday.”

Carichner says he checks in with the students for feedback, and they always have the option to not attend a rehearsal or performance if they feel uncomfortable. Band members have embraced the changes, he says, without a single complaint. He adds, “They want this experience so badly and they’re willing to do whatever it takes.”