You are here: Home / News / Trump surrogates traveling to 12 Iowa cities this week 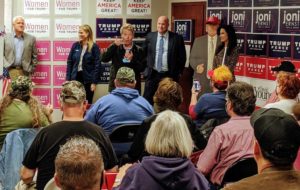 With 53 days left until Election Day, a handful of prominent Republicans are traveling the state in a red bus, rallying with Iowans who support President Trump.

“They tell us in the swamp that we support a liar. Have you ever met a politician that has told more truth?” Matt Schlapp, chairman of the American Conservative Union, said and the crowd responded: “No.”

Schlapp spoke to about 100 people gathered in a Trump campaign office in Des Moines late Thursday afternoon. Eric Branstad, senior advisor to Trump’s campaign in Iowa, urged the crowd to volunteer to make phone calls — and vote early so they can drive voters to the polls on Election Day.

“I need everyone to do everything they can for the next several weeks to get there,” Branstad said.

Whitaker continued: “I will not give a dollar of my money to any organization that supports a radical, socialist agenda.”

By the end of today, Whitaker and others on the Trump bus will have made stops in a dozen Iowa cities this week.