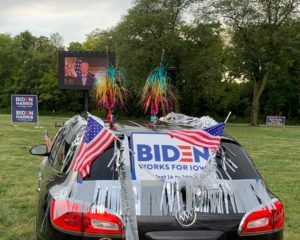 Vehicles lined up on a grassy field in a Des Moines park this weekend for the first-ever drive-in Polk County Democrats Steak Fry.

The horns did the cheering for the speeches which could be seen on two big screens and heard over loudspeakers or an FM frequency broadcast within the confines of the field.

Polk County Democratic Party chairman Sean Bagniewski said 900 people were served dinner in their vehicle by a corps of volunteers on golf carts, “making this one of the biggest Democratic events in America this year.”

Jeff Perry of Ankeny got to the field early and parked in the front row.

“Instead of cramming everybody into a confined space, we’re doing it the socially-distant, responsible way,” Perry said.

After a season of canceled parades, there was a contest for best-decorated vehicle. Connie Bock of Carroll and three other women attached American flags, silver streamers and campaign signs to their SUV for the evening.

“We had a beach ball on top, but we were afraid the wind was going to take it,” Bock said.

“Please, keep pouring your energy into this race because we know what’s at stake in this election and we don’t have a moment to waste…Let’s keep up the pressure, let’s roll up our sleeves and let’s bring this race home,” Harris said, her closing comments made amid a crescendo of horn honking.

House Speaker Nancy Pelosi recorded a video for the event, too. Congresswoman Cindy Axne and Theresa Greenfield, the Democratic Party’s candidate for the U.S. Senate, spoke to the crowd in person.

A spokeswoman for the Republican National Committee said it was “shameful” that Harris and Democratic presidential nominee Joe Biden didn’t show up in person for Saturday’s event and a signal the Biden-Harris campaign is “ignoring Iowans.”