You are here: Home / Crime / Courts / Supreme Court judge gets notice to report for jury duty 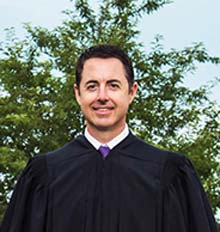 (Update) McDermott has completed his obligation and was not chosen for a jury.

One of the people at the top of the legal ladder in Iowa will find himself in a new position today.

Iowa Supreme Court Justice Matthew McDermott says he got a notice asking him to report for jury duty. “I’ve never previously been called for jury duty — but I am set to be juror number 299 in Polk County,” McDermott says. The lawyers from both side question members of the jury pool and each can remove or strike a juror if they choose. McDermott is not sure if his status at the top of the court system will lead to a seat in the jury box.

“I don’t know — often times lawyers tend to strike other lawyers — and certainly I think lawyers might be inclined to strike judges,” he says. McDermott says its a role in the legal process that he is interested in seeing how it all works.
“I am excited by it — I mean obviously as a citizen there are a lot kind of public opportunities that you have to kind of do your civic duty — you can vote, you can serve on a jury. I’ve never had this chance. The irony of course is that I have spent a lot of time working on the protocols so we can have safe jury trials,” McDermott says.

He says he is prepared for anything that might happen. “I wouldn’t be shocked if ultimately I wasn’t one of the names in that jury box when the trial starts,” McDermott says.

McDermott is from Carrol and was appointed to the high court by the governor in April to replace retiring Justice David Wiggins.