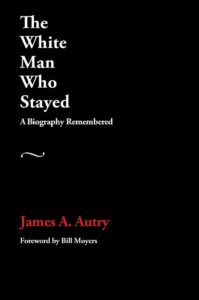 An Iowa author and poet is releasing his 15th book today, a true story of racism and redemption from decades ago that contains important messages for today’s generations.

Eighty-seven-year-old Jim Autry of Des Moines grew up in the segregated South and says “The White Man Who Stayed” is a biography about his cousin, Douglas Autry, a school superintendent in Mississippi in the mid-1950s.

“He tried to transfer some funds from the white schools into the black schools to help the black schools get books and that just infuriated a lot of people,” Autry says. “To cut to the chase, he got framed and sent to prison, got sentenced to seven years for embezzlement.”

The amount of money in question was about $630. The cousin served 18 months behind bars, was released, and eventually was reelected superintendent of schools and served three more terms. Autry says there’s another twist in his family’s tale.

“Our uncle, my father’s brother and his father’s brother was actually head of the Ku Klux Klan that was harassing Douglas and running his wife off the road. As I like to say, Faulkner wasn’t making anything up,” Autry says, laughing. “It’s a very convoluted kind of story.” Autry says the book is “not a crusade,” but says it’s a lesson for this era of Black Lives Matter, telling how “one person can make a difference if he’s willing to take a risk.”

The book, with an introduction by commentator Bill Moyers, was not written as a result of the death of George Floyd in Minneapolis or any of the racial unrest that’s unfolded during 2020. “I finished this book about 12 years ago and tried to sell it and publishers said, ‘Ah, that story’s been told,’ and I couldn’t get any interest in it, so I put it aside,” Autry says. “Then this past year, when all of this heated up and it seemed to be that the world was being made safer for white supremacy, I thought, ‘I’ll give that book another try.'”

The first publisher he approached, North Liberty-based Ice Cube Press, snapped it up. Autry retired in 1991 as an executive with Meredith Corporation, where he met his wife, Sally Pederson, who served as Iowa’s lieutenant governor from 1999 to 2007.