You are here: Home / Sports / Big Ten football to return in late October 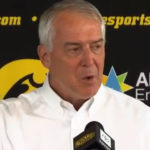 The Big Ten Conference reversed course and will reinstate the football season. The move comes more than a month after the league cancelled its fall season. Protocols will include daily antigen testing for players and coaches and a positive test will sideline a player for three weeks.

Commissioner Kevin Warren and the conference was heavily criticized after cancelling the fall season just days after it released a revised schedule in August and several coaches were vocal about the lack of communication from the top.

“There are many things we learned over the past 40 days and we will get better”, said Warren. “I think that is the goal in life is to make sure today is better than yesterday.”

An eight game regular season will begin the weekend of October 24 and conclude with a ninth game as part of “Championship Week” before Christmas with a game against the corresponding team from the opposite division. It includes the Big Ten Championship game on December 19.

“The seriousness of the pandemic is still very real, but I’m pleased for our student-athletes, coaches, and fans that we’ve been able to create a path forward”, said Iowa athletic director Gary Barta. “The medical professionals at every Big Ten institution have worked tirelessly to create strong protocols that can be consistently applied to every campus.”

A new schedule is expected to be released later this week.