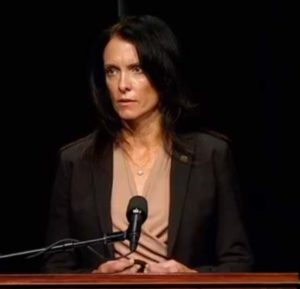 “The board’s action last night was disappointing,” Reynolds said during a news conference. “While the board voted 4-3 to prepare to implement a hybrid learning model, there’s no clear sense of how or when that might happen.”

Some members of the Des Moines School Board have said the district should continue online classes for at least the first nine weeks of the school year. In-person classes will only resume when the prevalence of Covid dips to certain levels in Des Moines. Reynolds said those metrics appear to be designed so students don’t come back to the classroom.

“So to be clear, Des Moines Public School is no closer to compliance with state law than they were before last night’s vote, which I think is unfortunate for the students,” Reynolds said.

The time students have spent in online classes since the school year started in Des Moines last week may have to be made up later in the year, according to the governor. The district did not get a state waiver for internet-only instruction.

The state’s largest school district is in danger of losing its accreditation.

“We were very hopeful to work with the district to find a solution,” said Iowa Department of Education director Ann Lebo. “At this point it seems that they were well into a plan that is out of compliance and will continue to do so, so we will initiate that process on our end.”