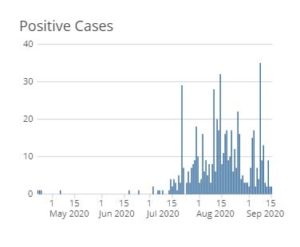 A state agency has notified Iowa nursing homes that the State Hygienic Lab doesn’t have the capacity to process all the Covid tests identified in new federal guidelines.

The Centers for Medicare and Medicaid now recommends routine testing of all nursing home staff, along with volunteers and contractors. Pat Garrett, a spokesman for Governor Reynolds, said the state will continue to test in nursing homes when staff or residents show symptoms or have been exposed to positive cases, but the new federal guidelines could generate more than 130,000 additional tests per week.

State Representative Timi Brown-Powers, a Democrat from Waterloo who’s a nurse, said the state already should have used federal pandemic relief money to pay for expanded testing in nursing homes.

“I prefer to play offense than defense,” she said. “I took this as, ‘We’re not going to put the effort in to make sure that we’re being proactive. We’re just going to wait until we have a problem.'”

Brown-Powers said an Iowa Department of Public Health letter appears to tell nursing homes they can cite the lack of state testing capacity as the reason more routine Covid screenings aren’t being done.

“What they’re being told is: ‘We’re not going to do it. We know the feds are saying we should be doing it, so just document whatever you can and that will be good enough,'” Brown-Powers said.

The governor’s spokesman said the federal government plans to send supplies and processing equipment for rapid Covid tests and state officials will notify nursing homes when those units are available. The state website lists outbreaks at 39 Iowa nursing homes today, an increase from a week ago when there were 32.

“We’re headed in the wrong direction, once again,” Brown-Powers said.

The state’s coronavirus website indicates 658 Iowa nursing home residents have died of Covid since the pandemic began. That’s nearly 53 percent of all the Covid deaths in Iowa.