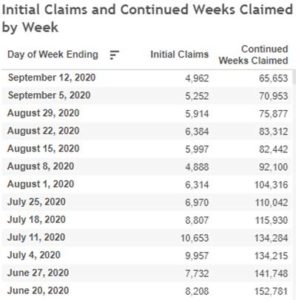 Iowa Workforce Development says the number of ongoing claims dropped for a ninth straight week to 65,653. Jobless claims peaked at around 190,000 early in the pandemic shutdowns back in May. New claims were under five-thousand for the first time in five weeks.

Construction continued to have the most new claims at 1,174 and manufacturing had 890.