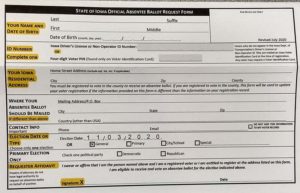 Over half a million Iowans have already requested an absentee ballot. That’s five times as many as had done so at this point in the 2016 election. Iowa’s secretary of state is asking a legislative panel to approve more changes to accommodate counting the huge increase mailed-in ballots.

Absentee ballots are placed inside a “secrecy” envelope and that secrecy envelope gets inserted into another envelope for mailing the ballot. According to a draft memo, Secretary of State Paul Pate will ask the Legislative Council to give county election officials authority to start opening those outer envelopes on October 31.

Pate also plans to ask legislators for permission to approve the relocation of precinct voting sites on his own, plus he’s asking legislators to OK letting ID cards that expired this year be used as a form of voter I-D on Election Day. Due to the pandemic, some Iowans haven’t been able to renew their licenses or get an ID card at the DOT this year.

This spring, Republican legislators passed a law that took away the secretary of state’s emergency powers during the pandemic, forcing Paul Pate to get the Legislative Council’s approval for these changes. The Council is scheduled to meet Friday to vote on Pate’s requests.