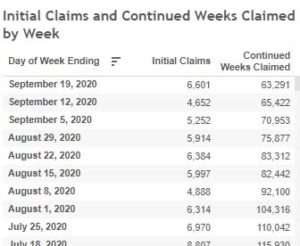 Iowa Workforce Development deputy director, Ryan West, says it is good to see the downward trend continue. “Hopefully, we are starting to climb back up the mountain. We are about six months from when the pandemic started — hopefully, now we’re seeing some normalcy,” West says. It was the tenth straight week that continuing claims declined. West says IWD has been able to shift from getting people signed up for unemployment to finding them jobs.

He says they are using some different ways to get people and employers linked up and he says that’s primarily with more online options. One new option is an app for the Iowa Works offices. “We’re really excited about it,” West says. “You can just go on your phone in apps and download the IowaWorks mobile app. And it’s just a great way to connect quicker, fast — and just more in line with how a lot of people are using their mobile devices.”

He says the Future Ready Iowa website also provides opportunities to take some free courses.
“It’s just a great opportunity to get upskill certificates, credentials, whatever it may be,” West says. “And it’s one of the things that continues to grow, so its FutureReadyIowa.Gov.” The number of ongoing claims dropped despite an additional 66-hundred first-time unemployment claims filed last week. The number of new claims had dropped in each of the last three weeks. Manufacturing (1,483) and construction (1,043) saw the most new unemployment claims filed in the week.