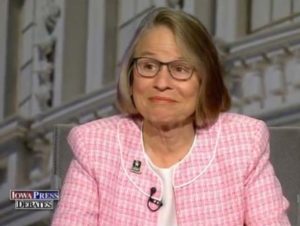 Republican Mariannette Miller-Meeks of Ottumwa said while she’d be willing to consider raising the federal minimum wage, states are best positioned to set the wage floor.

“A minimum wage is an entry level (wage). It was not….meant to be a wage that is to support a family,” Miller-Meeks said. “…It doesn’t look at states at individual states. It doesn’t look at employers, the cost of living in places.”

Democrat Rita Hart of Wheatland said if she’s elected to congress, she’d vote to raise the federal minimum wage, which is $7.25 an hour today.

“We’ve got to make sure that we’re keeping up with inflation,” Hart said, “that we’re setting a wage that is actually going to help families continue to survive as they try to pay their bills.” 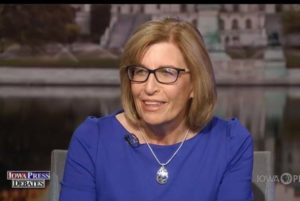 Miller-Meeks criticized Hart for a vote she took in 2018, when Hart was a state senator, that authorized Farm Bureau plans which offer coverage of health care expenses.

“I think it’s so hypocritical and funny that I’m being attacked for that vote,” Hart said. “….It was the only thing on the table, ..Every single Republican…voted for it. It makes me wonder, what would Marianette Miller-Meeks do?”

Miller-Meeks responded: “I don’t know the bill. I haven’t researched the bill, but nonetheless you heard my opponent say that she was concerned it would not cover pre-existing conditions, but yet she voted for it.”

As President Trump prepares to appoint another U.S. Supreme Court Justice, the prospects for overturning the court decision that legalized abortion rise. Hart, the Democrat in the second district race, supports the Roe v. Wade decision.

“It’s unfortunate that we’re still having this conversation when we know that women have a right to privacy,” Hart said.

Republican Miller-Meeks describes herself as “pro-life” but she also mentioned her support for making oral contraceptives an over-the-counter medication for adult women.

“The goal is to try to get access to birth control, to make it easier for women and try to prevent pregnancy,” Miller-Meeks said.

During tonight’s debate, the second district candidates expressed support for a bipartisan fix to ensure the Social Security system remains solvent. Republican Miller-Meeks said a variety of options should be considered and she wouldn’t rule out raising the retirement age or ending Social Security benefits for wealthy Americans.

“I’m willing to listen to people, to talk with them, so we can build a consensus and we can navigate through this,” Miller-Meeks said.

Democrat Hart opposes raising the retirement age, but she expressed support for starting to charge Social Security taxes on all earnings, as Americans aren’t taxed on annual income above $138,000.

“We have got to be willing to make sure that we’ve keeping this promise to our seniors and prioritize it accordingly,” Hart said.

Both candidates said science shows Earth’s climate is changing and both said the federal government needs to find ways to improve the U.S. transportation system and extend broadband service to every household within five years.