You are here: Home / News / Ernst vouching for safety of voting by mail in Iowa

In 2016, Ernst said she wouldn’t support confirming a justice in an election year. Ernst said Iowans “see the situation is different” in 2020, with Republicans now in control of the White House and the U.S. Senate.

“What they’re hearing from Democrats is that they will pack the court,” Ernst said. “They’ll get rid of the Senate filibuster and you cannot tell me that Democrats wouldn’t be doing the same thing right now.”

Ernst, who is seeking a second term in the U.S. Senate, said Democratic challenger Theresa Greenfield has also changed her views on the Supreme Court. 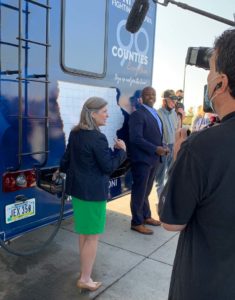 “My opponent already, she said she wouldn’t support packing the court earlier this year and now she hasn’t formed an opinion,” Ernst said. “…She’s not even elected yet and she’s shifting her position there.”

After Greenfield said she had no opinion on adding justices to the Supreme Court, Greenfield’s spokesman issued a written statement saying Greenfield believes campaign finance reform is the best way to improve our democracy.

Ernst filled up a campaign RV with ethanol at a gas station in Grimes early this morning. Ernst told a group of reporters gathered around the vehicle that she’s willing to push back if President Trump sows doubt about the outcome of this year’s election.

“Absolutely and I can do that with authority and I have been speaking out about this because I served as a commissioner of elections here in the state of Iowa,” Ernst said, “but I do believe that our election system here in Iowa is very, very safe and if people want to vote by mail — an absentee ballot by mail — please, please go ahead and do that.”

Ernst served as the Montgomery County Auditor for six years before she was elected to the state senate in 2010.