You are here: Home / News / Fall leaf color starting to show in Iowa 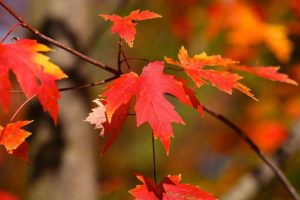 Iowans who’ve spent a lot of time cooped up in their houses during the many months of the pandemic have a good, new excuse to get outside and go for a hike or drive.

The fall color show is beginning in Iowa as the leaves begin to display the changing of the seasons. Joe Herring, an Iowa DNR forester based in Iowa Falls, says the autumn colors are already showing up in northern Iowa.

“We’re starting to see a lot of yellows appearing across the landscape, especially in some of the earlier-changing trees like cottonwoods, elms, walnuts, boxelders are turning yellow,” Herring says. “We’re seeing some nice reds beginning to appear in some of the shrubs like sumac, dogwood, plum and I’ve started to notice some of the maples changing now, too.”

The color peak is usually in mid-October but Herring says it could vary by a week or so on either side.  “The nice thing is that if you get out often, you’ll appreciate a longer spreading and showing of the fall color season,” Herring says. “It does come in early and stay long, even into November, we still see a lot of color lingering out there.”

The derecho caused widespread tree damage in Iowa last month, and the drought that’s lasted much of the year has put a strain on trees. Herring says there are also several common leaf diseases that can also impact this year’s color show.  “I’ve noticed a big bur oak tree in my back yard has been dropping leaves pretty readily for a couple of weeks now and it’s time to rake already,” Herring says, laughing. “We did see a fair amount of those drought symptoms and a lot of anthracnoses and a lot of bur oak blight.”