You are here: Home / Crime / Courts / Another person has died after shooting in Waterloo 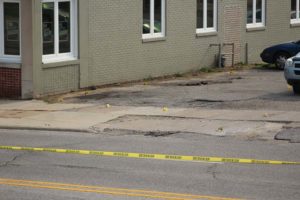 Waterloo police are investigating a mass shooting that left 2 dead.

A second person has died after the shooting rampage in Waterloo early Saturday that left nine other people injured, with one of them still hospitalized in life-threatening condition.

Police say the other nine suffered a variety of injuries that were caused by gunshots, broken glass, or being trampled after falling while trying to escape. Police also confirmed that the victims were all between the ages of 21 and 31, but they haven’t released any names.

According to police, the incident began as a gun battle between two or more people who were among an estimated 100 gathered inside a former downtown bar. Police say some urban motorcycle clubs were using the building unlawfully as an after-hours establishment.

Officials are asking anyone with videos or photos of the shooting to share them with Waterloo police.