You are here: Home / Human Interest / Iowa author looks back at the beginning of the state’s caucuses 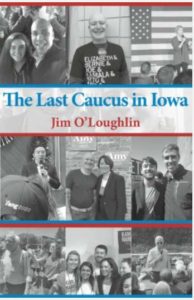 With Election Day some three-dozen days away now, a new book called “The Last Caucus in Iowa” takes an in-depth look back to where it all began.

Author Jim O’Loughlin, an English professor at the University of Northern Iowa, spent much of 2019 soaking up all he could of the first-in-the-nation political contest, attending Caucus campaign spectacles in big arenas, back yards, brewpubs, and living rooms.

“I made an effort to see as many candidates as I possibly could, attended all the events, got selfies taken and wrote a first-person experience of what that was like, leading up to and including Caucus Night itself,” O’Loughlin says. “The experience captures some of the really quirky, interesting, and ultimately important elements of the Iowa Caucus.”

During the year, O’Loughlin managed to see and meet 21 of the Democratic presidential candidates, which is -almost- all of them.
“The only one I feel really bad about is I didn’t get to see Jay Inslee, the governor of Washington,” O’Loughlin says. “He had a short-lived campaign that never quite got off the ground, though he’s an interesting figure and has taken an important stand on environmental issues. He dropped out before I got a chance to see him.”

O’Loughlin has been teaching in Iowa for 20 years, but he’s originally from Manchester, Connecticut. He says many of his out-of-state relatives were fascinated by the Iowa Caucus process. “When I would post things online about what was happening, there was a lot of interest in that,” he says. “Eventually, I realized I could turn this into a blog, and once I had done that, I realized I could actually turn this into a book, so it developed from there. I think the book would appeal to people who don’t know anything about the Iowa Caucus as well as to people who have been immersed in it throughout their lifetimes.”

The book is called “The Last Caucus in Iowa” as it was written about events that took place up to and immediately before the COVID-19 pandemic. O’Loughlin contemplates how the Caucus process will evolve if social distancing becomes a more permanent fixture in our society.

“In some ways, I do look back, and that’s one of the things I talk about in the book, to all of these crowded bars and halls that I was in, pressed against other people, and I do wonder — is that kind of experience going to come back?” O’Loughlin says. “That, I’m not so sure about because we are in a kind of different world now.”

The book is published by North Liberty-based Ice Cube Press and is available at icecubepress.com. The official release date is Thursday, October 1st.