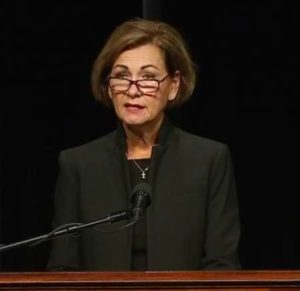 Two “Test Iowa” locations are opening in Orange City and Sioux Center to expand Covid-19 testing capacity in the northwest corner of the state. Governor Kim Reynolds said coronavirus cases have been elevated in Sioux County for the past three weeks.

“Sioux County currently has the highest 14-day average positivity rate in the state at nearly 28%,” Reynolds said yesterday during her weekly news conference. “Neighboring Lyon and Osceola Counties are both above 20% and some other counties in the surrounding area top 15%.”

The governor told rather new Covid cases in northwest Iowa are evenly distributed across age groups rather than being primarily among young adults.

“The case investigation process tells us that increased cases in these areas…aren’t really tied to a specific event or activity,” Reynolds says. “…The virus is simply spreading from person-to-person during the course of normal daily activities.”

In Sioux County, for example, half of recent Covid cases were among adults between the ages of 41 and 80 and another 12 percent were among children under the age of 18. Reynolds said the virus seems “to move around the country” and is currently hitting the Midwest and the tri-state region of northwest Iowa and neighboring counties in Nebraska and South Dakota.

“We’re bringing in additional tests so that we can identify, so I think we’re going to see, kind of, hopefully what we saw in other areas where we see that spike,” she said, “and then, hopefully, we’ll see that come back down.”

Since August, the testing sites in Orange City and Sioux Center have been screening students and staff from Northwestern and Dordt University. Now, those sites will offer Covid tests to others who register online at www.TestIowa.com.

The number of Iowans hospitalized for treatment of Covid-19 has increased 20 percent in the past week. Dr. Caitlin Pedati, the state medical director, says the best advice for curbing community spread of the virus is what it’s been since the start of the pandemic: stay at least six feet away from others, wear a mask and wash your hands.