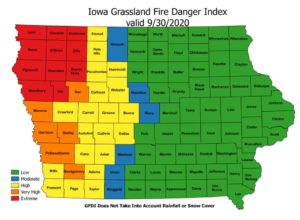 A northwest Iowa sheriff asked farmers to temporarily halt the harvest, fearing high winds would carry sparks from combines and set off fires.

Several grass and field fires were reported Tuesday afternoon in Sioux County while under a ‘red flag’ warning that was issued from the National Weather Services. County resources were stretched thin fighting the fires as they spread quickly in the dry and windy conditions. As a result, county authorities issued a request, asking farmers to refrain from harvesting until conditions improved.

The same is expected today as the National Weather Service has issued another red flag warning for portions of northwest Iowa from 2 p.m. until 7 p.m.