You are here: Home / News / Pence rallies with Republicans, gets ovation for defense of Barrett 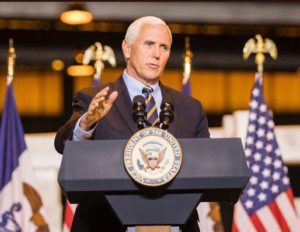 Vice President Mike Pence drew cheers from crowds in Iowa today as he vowed Republicans will soon fill the vacancy on the U.S. Supreme Court.

Pence spoke at a manufacturing plant in Carter Lake early Thursday afternoon, then addressed about 600 people at an event in downtown Des Moines hosted by The Family Leader. Pence said the president nominated a “remarkable…conservative woman” and he challenged Democrats to provide her a “respectful” Senate confirmation hearing.

“When she was nominated to the Court of Appeals,” Pence said, “during Judge Barrett’s confirmation hearing, the Democratic chairman of the Judiciary Committee criticized her Catholic faith, saying: ‘The dogma lives loudly within you.'”

California Democrat Dianne Feinstein is the senator who questioned how Barrett’s faith would influence her opinions as a judge. Pence said that criticism had been revived by “Hollywood elites” opposed to Barrett’s ascension to the Supreme Court.

This was the vice president’s fifth trip to Iowa this year. He promised his Iowa audiences a Covid vaccine is “weeks away.” Joe Biden’s deputy campaign manager issued a written statement responding to Pence’s visit, saying after nearly 90,000 Iowans contracted Covid, there’s “no end in sight” to the pandemic’s impact on the health and finances of Iowans.