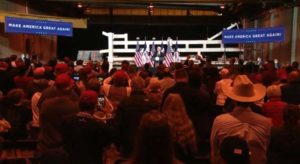 “The road to victory goes straight through Iowa,” he said, to cheers.

During a speech early this afternoon in western Iowa, Pence began by praising Trump’s performance in Tuesday night’s debate.

“If you didn’t know it was on, maybe you missed that debate the other night,” Pence said, laughing along with the crowd before his voice rose along with applause in the room. “I’ll tell you what: President Trump took our case to the American people and he took the fight to Joe Biden and we’re going to keep on fighting for 33 days — all the way to victory on November 3.”

Pence spoke to about 275 people in a Carter Lake plant that makes galvanized metal parts for bridges and other structures. The visit gave Pence an audience in Iowa, where polls suggest there’s a tight race for Iowa’s six Electoral College votes, and in Nebraska, where one of its Electoral College votes in the Omaha area is up for grabs.

“My friend, your president, has never stopped fighting to keep the promises he made to the people of Iowa and Nebraska,” Pence said. “Now it’s your turn to fight for him.”

Pence touted President Trump’s appointments to federal courts drawing huge cheers from the crowd. Pence promised a Covid vaccine would be available before the end of this year and the country’s economy would continue its “comeback.”

“Having lost 22 million jobs at the height of this pandemic, I’m proud to report to you — with the jobs report just around the corner tomorrow — that as of today, 10.6 million Americans have already gone back to work,” Pence said, “including 97,000 right here in the Hawkeye State.”

This is Pence’s sixth visit to Iowa this year and he hinted at his own aspirations to run for president in 2024. After the crowd chanted: “four more years” for Trump, Pence gave the audience a check list for speaking with their neighbors.

Later this afternoon Pence will speak at a fundraiser in Des Moines for The Family Leader, a Christian conservative group. Secretary of State Mike Pompeo — a potential Pence rival for the Republican Party’s 2024 nomination — spoke to the group this summer.