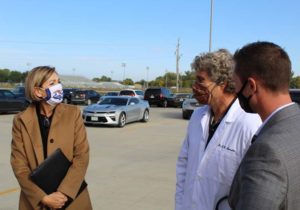 “You know, there’s various ways that the virus impacts individuals,” Reynolds says, “so we’ll wait and see what kind of symptoms that the president and the first lady and those that have tested positive have.”

It’s unclear when Trump may return to the campaign trail.

“He’s isolated for 10 days. He has to test, I think, two negative tests prior to being able to go back out,” Reynolds says, ” so we’ll just kind of wait to see what his symptoms are.”

Reynolds says there are plenty of surrogates, like her, who can carry the Trump campaign message to voters.

“We had one of the strongest economies in our lifetime and then Covid hit,” Reynolds says. “…The president is the guy that can get that economy back up and going.”

After a visit to the White House in May, Reynolds went into quarantine after an aide to Vice President Pence tested positive for Covid.

“I was in the Situation Room and there was actually someone (there) who tested positive,” Reynolds says. “So, with essential workers, you just wear the mask. I social distanced. I limited my exposure to anybody and I tested for nine days straight and it was the PCR testing — which is the ‘gold standard’ — and tested negative I’ve been tested multiple times since then.”

Reynolds says she had a cold early in the pandemic.

“And, just to be sure it was a cold, we got the testing done and it was negative, so we’ll continue to be responsible and do the right thing,” Reynolds says. “If I can’t social distance, I will have a mask on and just continue moving our economy forward.”

Governor Reynolds made her comments after visiting with a doctor in Le Mars who has posted videos on Facebook about the latest Covid-19 developments.

Vice President Mike Pence, who was on Iowa yesterday, has announced he and his wife have tested negative for the coronavirus. Pence discussed his work leading the White House Coronavirus Task Force during appearances in Carter Lake and Des Moines.

“With American innovation, our dedicated researchers we believe are just literally weeks away from the first coronavirus vaccine for the American people and we’ll have tens of millions of doses available the moment it’s approved,” Pence said.

Pence spoke to about 270 people in Carter Lake and 600 people in Des Moines yesterday.

“We’ve demonstrated as a nation that we can slow the spread,” Pence said. “We’re going to continue to protect the vulnerable, continue to save lives and we’re opening up America again.”

According to the vice president’s office, the last time Pence and Trump were in close proximity was Tuesday, at the White House.