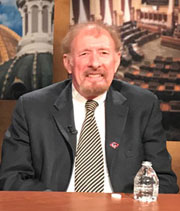 After bottoming out this spring, Iowa’s economy is seeing rapid, significant improvement this fall, according to the monthly Creighton University survey.

The regional economy is also quickly coming back, according to Creighton economist Ernie Goss. He notes the survey scores the economy on a 0-100 scale, with 50 being growth neutral. “Our survey of manufacturing supply managers in the nine-state Mid-American region was really a strong reading, up to 65.1, that’s up from 60.0 from August,” Goss says, “and not only that, it’s the highest level we’ve recorded since May of 2018.”

The survey shows Iowa’s Business Conditions Index bounced well above growth neutral for September, climbing to 67.1, a healthy jump from 56.4 in August. The regional economy is also regaining momentum after a very difficult several months. “This is the fifth straight month the index has grown, that’s since reaching what I’ll call a real valley in April of this year when the COVID-19 really hit the regional economy,” Goss says, “so it was a very good report.”

The nine-state region lost 751,000 jobs since February, or a drop of more than 5%. The September hiring figures are the highest since June of 2019, but Goss says pandemic-related problems persist. Many businesses are having trouble finding and hiring qualified workers.

“Almost 46% reported worker absences because of COVID-19 and related issues,” Goss says, “and 63% of the manufacturers reported shipping difficulties, so that has been a real issue.” Iowa’s job picture has rollercoastered during 2020. The U.S. Department of Labor says the state’s insured unemployment rate stood at 1.7% in the second week of March, peaked at 12.4% in the first week of May, and fell to 4.3% in the first week of September.