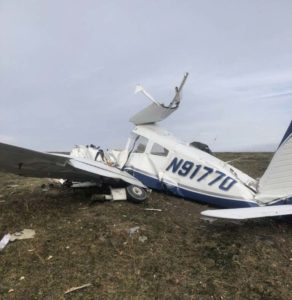 Four people died in the crash of this plane.

Several lawsuits are being filed by family members of the victims of a plane crash that killed four people from the Le Mars area.

The Piper plane piloted by Ed Anderson of Le Mars crashed into a pasture near Guthrie Center on November 9, 2018. The lawsuit names Ultra Flight LLC, an aviation maintenance facility located in Le Mars, and Tom Mullally as its owner, as the defendants.

The National Transportation Safety Board issued an investigation report in December of 2018 revealing a two-inch long crack in the engines aft exhaust muffler. The inner surface of the muffler heat shroud was coated in sooty and grey colored deposits. Similar deposits were also present on the inner surface of the cabin heat hose that ducted air from the shroud to the cabin heat distributor box assembly.

Toxicology testing performed by the Iowa State Medical Examiner’s office revealed elevated levels of carbon monoxide in the blood of all four occupants.  Those who died in that plane crash were 49-year-old Ed Anderson of Le Mars, 36-year-old Patrick Kellen of Le Mars, 15-year-old Samantha Clark of Le Mars, and 28-year-old Tyler Douvia of Merrill.