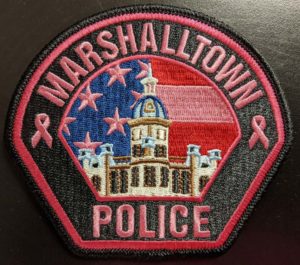 The Marshalltown Police Department and the local Fraternal Order of Police lodge are joining with other law enforcement agencies across the country to sell pink police patches as part of National Breast Cancer Awareness Month.

Marshalltown Police Officer Andrew Cole says 300 special patches are available in a pink hue.  “We’ve taken the white and the red and we’ve gone with a dark and light pink on our patch and have thrown a couple of commemorative ribbons or memory ribbons in pink on our patch,” Cole says, “and we’re going to be selling those throughout the month of October.”

Cole says you will see some officers in Marshalltown sporting that patch on their uniforms. “We’ve had family members of our own within our community of law enforcement officers right in Marshalltown, families, and friends who have been survivors and we’ve lost some friends as well,” Cole says. “It’s kind of a near and dear project.”

The patches will sell for $10 with the material and work all supplied up front and the full donation goes to the Susan G. Komen of Greater Iowa organization. For more information, contact Officer Cole at the Marshalltown Police.