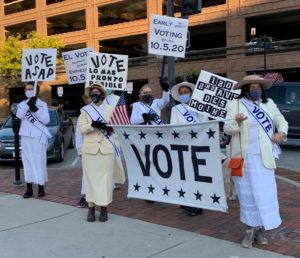 Early in-person voting began this morning at 8 a.m. in Iowa at county auditors’ offices. A couple who gave their names as Harry and Kate were waiting in a line outside the Polk County Election Office.

“We’re actually leaving town tomorrow and we wanted to make sure we voted,” he said and she added: “That our vote counted.”

He continued: “Pretty set on what our choices are going to be, have been for some time, so this is pretty straight forward for us.”

A group of women dressed in white, the suffragette uniform, stood on a street corner in downtown Des Moines to encourages passers-by to vote. Allison Engel of Windsor Heights was holding one end of a long banner that said: “VOTE.”

“In 2018, we organized and promoted early voting and we felt it was even more important this year because the legislature has reduced the number of early voting days from 41 to 29,” she said.

Engel is encouraging people to vote this week.

“If you’re getting tired of the phone calls and the texts from the campaigns,” Engel said. “if you come in and vote and you turn in your absentee ballot quickly, then your name gets off those lists.”

As of Friday, more than 623,000 Iowa voters had requested an absentee ballot through the mail. Iowa’s 99 county auditors have been delivering those absentee ballots to post offices today.