You are here: Home / Fires/Accidents/Disasters / Flood damage on the Missouri River could slow barge traffic 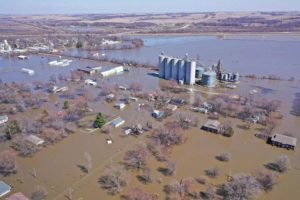 Farmers across western Iowa who planned to move their commodities by barge along the Missouri River this fall could be facing a slowdown.

Colonel Bill Hannan, the Kansas City district commander for the U.S. Army Corps of Engineers, says barge season may be threatened as work is still underway to repair damage to the navigation channel after three years of high water and widespread flooding.

“The river levels have returned to normal,” Hannan says. “They’re not low, they’re just normal service levels that we would see, but because of all that damage to navigation structures, it’s creating shallow spots in the navigation channel on the river.” Last year’s floods damaged up to 75% of the 7,000 river training structures on the lower Missouri River.

Repairs could cost $200 million  but the Corps of Engineers only allocated 20-million. Hannan says he understands the importance of barge traffic with harvest season already underway. “We are doing absolutely everything we can to not let the barge traffic stop,” Hannan says, “because we know the agricultural community is really dependent to move their goods in the fall harvest here.”

Hannan says crews from the Corps and from private contractors are making repairs and guiding barges away from trouble spots. He says the Corps is working hard to find more money to restore the river’s navigation channel.