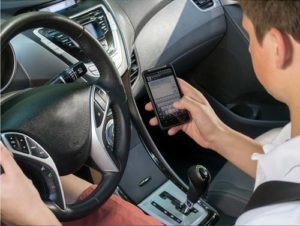 A new word is being used to describe the dangerous practice of texting while driving, comparing it to being drunk behind the wheel.

Mark Peterson, a spokesman for AAA-Iowa, says “intexticated” refers to the driver being distracted by a cell phone — and it can have deadly consequences.

“When you’re intoxicated, you’re consuming alcohol or a controlled substance, and many times that’s going to cause a crash,” Peterson says. “When you are texting or looking at the internet and you are using that electronic device in a manner that it is not meant to be used can cause someone to have a crash.”

A federal report finds nearly 3,000 people were killed and 400,000 were hurt in motor vehicle crashes involving distracted drivers in 2018. Peterson notes, looking away from the road for just two seconds doubles the risk of a crash. While cell phones are a big distraction, our vehicles themselves can be just as hypnotizing.

“If you buy a new car these days, some of the technology that’s available to you is unbelievable. There’s very little you can’t accomplish in a car,” Peterson says. “That’s going to take away from its primary purpose. So many times, you get involved with all this additional technology, it takes away from what they’re doing, driving, and paying attention.”

Under Iowa law, any motorist using a cellphone for texting — reading, writing or sending — can be pulled over, unless the vehicle is at a complete stop and off the traveled portion of the road. He lists the top three distractions for drivers as:
“Number one is cell phone use, in-vehicle technologies, and actually one that doesn’t have to do with technology is just conversation and talking.”

Anything that takes a driver’s attention away from driving can result in a fatal crash, Peterson says, including eating and drinking, adjusting the navigation, or picking your next podcast. Nearly one-quarter of crashes that involved a distracted driver also involved the use of a smartphone.