The Waterloo City Council voted last night to take steps toward changing the city police department’s decades-old logo of a red griffin, after critics pointed out its similarity to a white supremacist image.

Abraham Funchess, executive director of the Waterloo Commission on Human Rights, told KCRG TV that the logo needs to go. “The police logo, which was developed in the ’60s, was very close in resemblance to the KKK dragon,” Funchess says.

The griffin is a mythological creature that’s a cross between an eagle and a lion, but Funchess says it looks a lot like the image associated with a high-ranking member of the Ku Klux Klan, who’s known as a Grand Dragon. 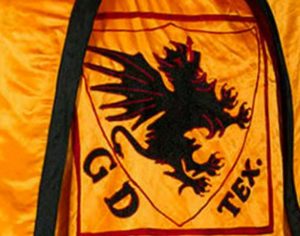 “If a significant segment of the community has a problem with it because invokes racial terror and racial trauma,” Funchess says, “and reminds people of lynching and the state destruction of black bodies, why would we continue to support something like that?”

The griffin logo appears on officers’ badges and patrol cars. Waterloo City Council member Sharon Juon says a committee will assess the costs involved to make a change and explore what a new logo should represent for the police department.

Juon says the committee will be comprised of people from the community as well as from within the police department. The first committee meeting is scheduled for Wednesday.