You are here: Home / Agriculture / Complaints about herbicide drift hit a record 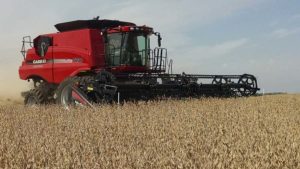 The number of complaints from Iowa farmers about a powerful herbicide floating from one field to another and causing damage has reached record levels this year.

“Some of it is the volatility that with the use in soybeans, you’re applying it later in the year and so you have warmer temperatures,” Hartzler says. “This year, we saw a lot more movement out of corn fields than typical, so the dicamba use in corn has increased with the spread of herbicide-resistant weeds.”

He says lowering the volatility might be the best course of action. “For other dicamba products that are used in row crops, I think we ought to look at requiring all of those products to be lower volatility,” he says, “because it’s not just volatility out of soybeans that’s causing problems.”

Farmers are doing their best to follow directions when applying dicamba, but drifting continues to cause damage. “It’s frustrating when they do everything right and they still have issues,” Hartzler says. “The number-one criteria to preventing problems is to evaluate individual fields to determine the risk of off-target movement.”

Some states, including Missouri and Minnesota, imposed restrictions on dicamba applications, while Iowa launched special training sessions on the use of the herbicide in 2018.